The first thing I did when I had issues with my noisy neighbors was that I got myself a pair of ear plugs and over the years, before I made other adjustments that helped the situation, I went through many different brands (maybe 7). So which ones worked best?

Well I can tell you that the cheapest are usually not the best to have. Ideally you want to have earplugs that are within the $5-$10 range. I’m not going to say one brand is the best because a number of them have worked well for me so I’ll just give you a list of the best ones I’ve used that have given me very good results. They all have a high NRR rating which means the higher the NRR number, the more noise reduction they will bring you. Generally around 30 NRR and above is considered good. 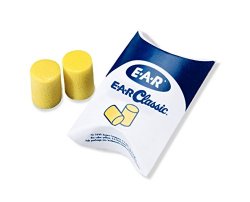 1. 3M E-A-R Classic Earplugs. I was given these by my father who received them from a medical office. These I’d say work VERY well but only for about 20-30 times. They usually lose their form after that any uses and look nothing like the circular cylinders they once did, but that’s why they come in large packs.

You will have to curl them before inserting them into the ear, but as they expand, you won’t feel much discomfort and it’s easy to get used to. They are made of foam and this will generally do a great job of reducing most sounds, especially the low ones that tend to wake up light sleepers. I believe their NRR is 29.

2. Radiens Form Earplugs. These were the very first ones I used and they lasted a bit longer th

an the 3M E-A-R, but their use also dies down the more you use it which is fine as long as you buy the large packs. These have a NRR rating of 32.

I think the 3M’s are slightly better for blocking out noise even though the NRR rating is a bit lower, but they get used up faster than the Radiens. These ones come in 25 packs, while the 3M has more so you’ll basically end up using both brands around the same time.

3. Hearos form earplugs. These come in different colors, but they seem to be all the same. With a 32 NRR rating, 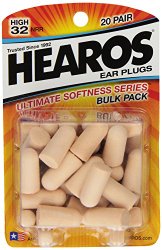 you will be able to block out most moderate noises such as talking or cars passing by as well as general sounds made from the outside. I also have used these and they work just as well as the other 2.

I have also tried cotton and wax ear plugs. I think these 3 are at the top.

Any room for ear muffs?

I don’t like using them because I like to sleep on the side and if there is anything other than ear plugs pushing towards my ears, it’s going to hurt and affect my sleep. There are ear muffs designed to be used together with ear plugs. Together they do create a great cover for noise, but I’ve never had good sleep from using them.

These are VERY expensive ear plugs that actually play white noise so it blocks out everything, but those are well into the $100’s, a number some may be willing to spend to sleep better at night, but don’t buy those, I’ll show you something even better 🙂

Use a white noise machine with ear plugs for the BEST results:

A white noise machine costs much less than a white noise ear plug and the sounds it makes can be adjusted to better help you relax. I’ve been using one of these things with ear plugs for about 3 weeks now and I believe this is the best combination you can have to block out just about any noise a neighbor or anyone/anything else makes.

There are a bunch of white noise machines you can buy with the most popular as well as the one I use that’s called the Marpac DOHM-DS sound conditioner. I love this machine. I’ve been able to get better sleep and with the earplugs, I get great results.

When choosing earplugs, just know that ones with a high NRR rating are usually best and it’s better to go for the cheaper ones. They’ll wear down eventually, but you get a lot of them per pack.

Have any personal suggestions for ear plugs? Let’s “hear” it!

Block The Noise With This Sound Machine! 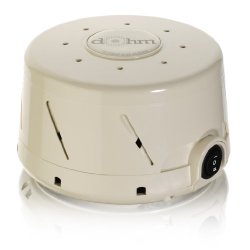 Lenny do this: 1. Take the code outbrain gave you and paste it in THIS whole box. 2. When it's pasted, remove this entire instructional text. 3. Select Save and give it a few hours then see if the ad shows.